An FPV drone kit is a small-time investment that every beginner drone pilot must make before moving to more complex forms of drone assembly. Buying a drone kit requires some knowledge regarding the different components and parts of the same.

Although in a drone kit, everything is bundled together, it would be better if you get an idea about these parts and what role they play in piloting a race drone. The majority of FPV drones are used for racing and other adventurous activities related to drones.

In this guide, we will talk about the components of an Flying First Person View drone kit and list out some of the best drones kits in the FPV category.

Components of an FPV Drone Kit

Understand it like this, a drone frame is armor, protecting sensitive and more expensive components. From electrical components to propellers and motors, everything is fitted on the drone frame.

Hence the frame must be strong, durable, and accommodating to the requirements of the drone pilot. The motive is to ensure a seamless flying experience without hindering the pilot’s controls.

Two types of frames are prevalent in the FPV drone industry. Micro frames have a size of less than 150 mm, and mini frames are sized more than 150 mm. The majority of the frames are built in X-shape.

Other types include a hexacopter and a tricopter. In these and all the other frames, the size is measured by the motor-to-motor distance.

The flight controller is like the brain of the FPV drone. It’s a circuit board affixed with a wide gamut of sensors that monitor and detect the drone’s movements and follows the user’s commands. Based on the commands, the flight controller helps pilot the drone according to the instructions.

For a beginner, it’ll be better to start with the standard ones. Ones, they have an understanding of these, moving to the advanced ones becomes easier. In addition to the sensors, the flight controller also includes GPD, sonar sensors, LED, etc.

With time and developments, the flight controllers are becoming smaller in size but advancing in terms of capabilities.

In an FPV drone kit, buying the transmitter is one of the simplest jobs as you don’t have to consider a whole lot of things. Plus, there aren’t many VTx systems available.

The majority of them are analog, transmitting 640×480 resolution. A few things you need to check before buying one is channel support, frequency, power output, and antenna connectors.

As the name suggests, FPV cameras are mounted on the frame and help the pilot view the area ahead. Every FPV drone kit cannot be complete without a camera.

The FPV camera can send the video footage to FPV goggles, tablets, monitors, or smartphones. A drone’s ability to fly at a higher distance depends on the FPV camera and its configuration.

High-end cameras are required when you want to be 5 miles or above in height, which is normally seen in DJI FPV drones or military drones. For a beginner, you should not spend a ton of money on these cameras.

Most FPV drones have brushless motors that are used to spin the propellers. Selecting a suitable motor is the hard part for every FPV drone pilot. That is why they prefer buying an FPV drone kit, which includes every required component selected in relation to the parts of the drone.

For instance, the choice of the motor is affected by the overall weight of the drone. It is imperative that the motors can generate enough thrust to achieve successful liftoff.

There are a wide variety of drone motors you can choose from. Everything depends on the requirements. However, as a standard rule, brushed motors are used in small drones, and large drones require brushless motors. If you are going with a brushless motor, you also need an ESC or Electronic Speed Controller.

An Electronic Speed Controller is akin to the brakes of a drone. High-speed and high-range drones make all kinds of movements and maneuvers, especially the racing ones. An ESC is the component of FPV drone kits that helps regulate the drone speed relative to its direction.

Within an ESC, there is a power supply stage, current detection circuit, microcontroller, and a communication interface. Simply put, the ESC in a drone is responsible for controlling and regulating the speed of the electric motor, which further helps control the drone.

FPV racing drones need the best ESC components as the pilots need the drones to listen and respond in a split second; otherwise, they risk losing the race.

The last FPV drone kit component you need to consider is the propeller. Technically put, propellers transform the rotary motion into linear thrust. As the propellers spin, they create an airflow, which creates pressure between the surface above and below the propellers.

The interaction between them navigates the air mass in a single direction, thereby lifting the drone. While choosing a propeller for your FPV drone, you need to look at five things;

More importantly, note that all the above are interlinked with each other. So, you cannot expect to compromise on one rather than the other.

These are the major FPV drone kit components. Understanding their role is imperative for every drone pilot. Beginner drone pilots who want to enter the racing world must start learning about them but do not start assembling and experimenting right away.

The best approach would be to understand these components along with others, and then as they develop a strong understanding of the same, move forward.

FPV Drone Kits You Can Buy in the Beginning

We have curated a list of some Flying First Person View drone kits you can buy initially. These kits cater to FPV drone racing and related activities. Go through them and buy the one you think will support your purpose effectively. 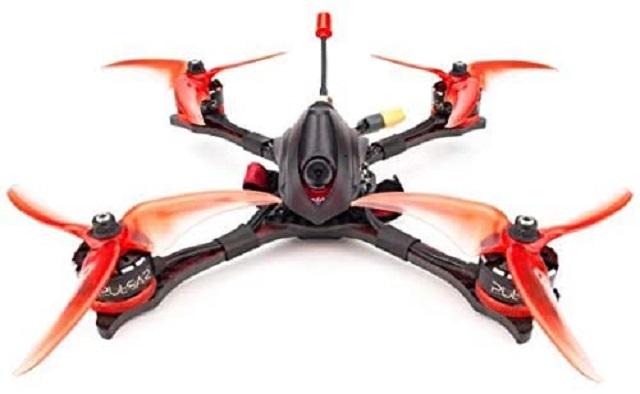 The EMAX Hawk Pro is a powerful drone with brushless motors and boasts a power-packed performance. Its carbon fiber frame is sturdy and has a clean aesthetic appeal that makes it even more desirable.

In addition to the standard FPV  kit parts, it also has a mushroom antenna which enhances the signal strength. A great drone kit for beginners, but you may have to bind some of its parts together. 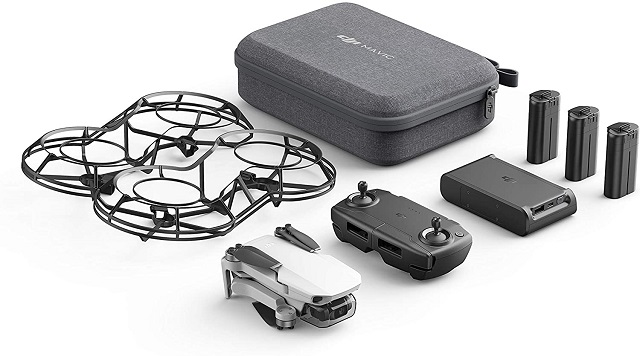 Buying a DJI drone is the ultimate goal of every drone flyer, and you have got that chance early. Buying this DJI Flying First Person View drone kit will give you the experience of flying a DJI drone.

The impressive list of features comes with a camera that can record 2.7k Quad HD videos and take shots with 12 MP camera quality. Within the kit, you will find batteries, propellers, frame (fitted with some parts), propeller guards, controller, USB C Connector, carry bag, and spare control sticks. 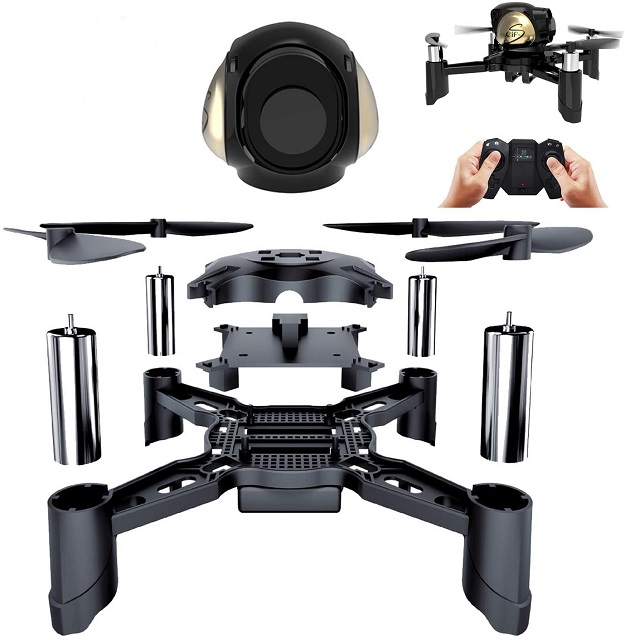 If you are looking for a budget-friendly FPV drone kit, this is the one. The Gilobaby is a STEM remote-controlled DIY drone that will also give you the true experience of assembling a drone.

The kit does not come with a camera, which means you have to buy and attach it externally. Other than this, you will be flying a 6-axis gyro-controlled drone that offers fantastic stability and also features a headless mode.

The 360-degree movement functions make the drone flexible and able to fly in any direction, which is a major advantage in drone racing. You will get 3AAA batteries offering 5 minutes of fly time. 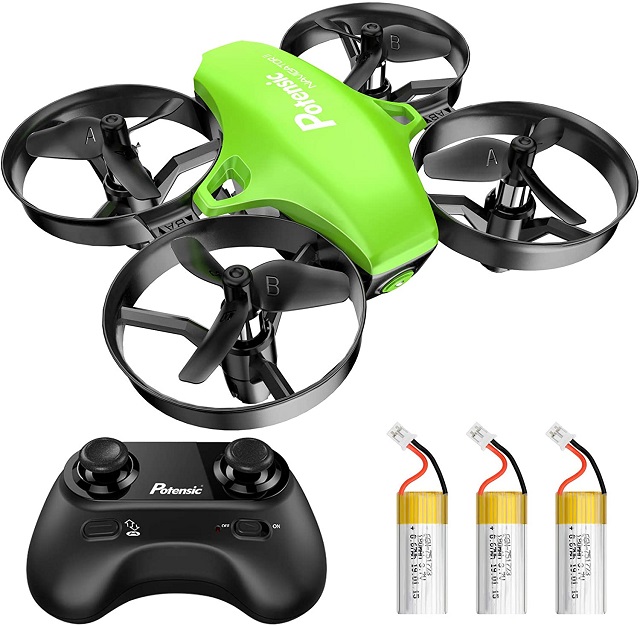 The Potensic A20 Mini drone FPV kit has three flying speeds, making it a perfect choice for indoors and outdoors drone flying. There is no camera present in the kit, which makes this Flying First Person View drone kit cost-effective.

No camera gives you the freedom to choose a camera according to your requirements. The headless mode of flying gives you the benefit of piloting the drone in any direction without altering the orientation.

Transmission-wise, this is a great kit as its 2.4GHz transmitter does not cause any lags or interruptions. Another great feature is the Altitude hold, which ensures higher stability of the drone during the flight. 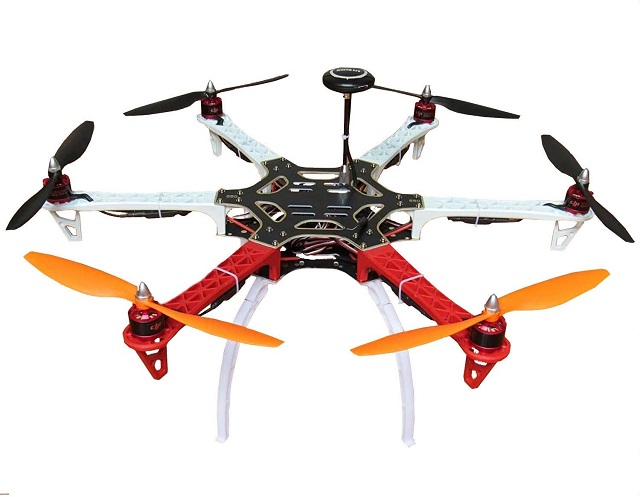 The Hobbypower F550 is a special FPV drone kit included on this list because of its hexagonal frame. With this, you will get a brushless motor and a flight controller along with other necessary components.

The drone remote controller can be programmed with any generic control software. Because of more propellers, the drone is more stable than its counterparts.

Since it has a hexagonal frame, you will learn a lot of new things about DIY drone assembly.

Choosing and assembling an Flying First Person View drone kit are two different aspects, and one should not rush with any decision here. For a beginner, the temptation to buy everything separately is high, but it won’t be a smart decision.

Buying an drone kit will help you gain the required experience and expertise of FPV drones. Plus, not every component of the drone kit will come pre-attached in the package. You will get the chance to attach some components and learn a few things along the way.

While buying an FPV drone kit, make sure to understand your requirements and the compatibility of every component with each other. Start with lightweight drone kits and then gradually move to other complex forms of components while understanding the lifting capabilities of the frame.

Best FPV Racing Drone You Must Know About

This site uses Akismet to reduce spam. Learn how your comment data is processed.